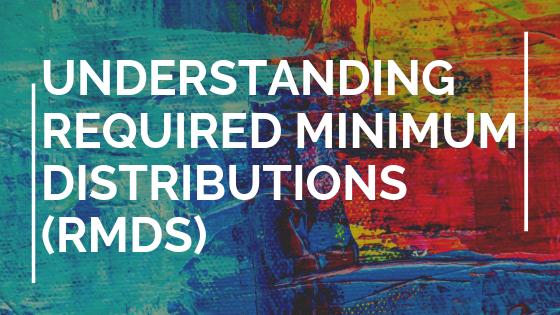 Like many of our clients, you probably have an IRA. And there’s a real good chance that it is the largest financial asset you own. Yet we’ve found that when we meet with clients for the first time, they have a lot of questions on what the IRS will make them do with their IRA... especially when it comes to Required Minimum Distributions (RMD).

And that’s why we’ve put together this guide of the most frequently asked questions... so that you’ll have a better idea of what’s in store for you and your loved ones.

1. How much income tax do I have to pay on my RMD?

A. If you take money out of your IRA, it’s taxable at your maximum tax rate. The lower capital gains rate doesn’t apply. So that’s as much as 35% for the IRS. And don’t forget that your state might want something too.

2. Do the states all have the same tax laws on RMD?

A. That would be too simple. RMD receive different tax treatment in different states. But these differences could present opportunities for you to manage your tax bill and cash flow more efficiently.

Here are a few of the variations among state tax laws:

States Where All Income Is Tax-Free

In Florida, Texas, Nevada, and other states where there are no state income taxes, residents can keep a greater share of their IRA distributions. Therefore, if you’re thinking about relocating to the Sunshine State from a state such as New York, which assesses income taxes on IRA withdrawals, you might consider moving before you have to start your RMD. That way, you can avoid any state income taxes on the distributions in New York.

States Where IRA Withdrawals Are Tax-Free
Certain states (New Jersey, for example) don’t allow taxpayers to deduct IRA contributions from their taxable income on their state tax return. But later on when those contributions come out of the IRA, residents of these states typically don’t have to worry about paying state
income taxes on the withdrawals.

3. Suppose I don’t take anything out? No tax, right?

A. Yes. But you cannot keep money in your IRA indefinitely. There comes a day of reckoning. You must begin removing money by April 1 of the year following the year you turn 70 1⁄2. This means that if, for example, you turned 701⁄2 at any time this year, your first payment is due by April 1 next year. You may be better off, though, paying it this year. Because if you wait, you’ll have to take two taxable distributions next year: the first by April 1 and the second by December 31.

4. Why does the government make me take out money? Can’t they just wait for me to die?

A. The IRS established the RMD rules so they would have a better chance of getting the tax on the account while you are alive... sooner rather than later.

Most IRA owners use the Uniform Lifetime Table for calculating lifetime RMD after turning 70 1⁄2. The only time you would not use this table would be if your spouse is your sole beneficiary for the entire year and is more than 10 years younger. If this is the case, you would use the 14-page Joint Life Table from IRS Publication 590.

6. What is the procedure for complying with the Required Minimum Distribution transfer?

A. In the year you turn 70 1⁄2, simply remove the amount necessary to satisfy your first year’s distribution from your IRA and place it in a non-IRA account. You must also declare on your tax return the amount of the distribution and pay the required tax. Each year thereafter you must repeat the process. You should always consult a Certified Public Accountant to verify that you have met all of the requirements necessary to comply with the IRS rules pertaining to Required Minimum Distribution of an IRA.

7. What if I don’t start taking RMD when I’m suppose to?

A. The IRS gives you a big incentive to do it... and do it right: A 50% excise tax on the amount not taken!

8. How would the IRS know I didn’t pull out enough money each year?

A. Don’t, for a single moment, think you’d get away with that. The IRS is implementing its goal of making sure that IRA owners and beneficiaries are withdrawing and paying tax on the required amounts. Therefore, IRA custodians must report to the IRS accounts that are subject to RMD. The reporting will be done on Form 5498.

9. Last year I lost a bundle in the market. And I just did the RMD calculation based on the preceding year’s balance, as required. The problem is that there’s not enough money in the account now to cover my RMD. Will I get hit with the 50% penalty for not taking out the right amount?

A. Normally you’d be looking at a 50% penalty for not taking the correct RMD. But the IRS has ruled that if an IRA has dropped to the point that the RMD exceeds the entire account balance, the owner can simply empty the account. And the 50% will not apply. So you’re in the clear.

A. No. Roth IRA owners never have to worry about RMD. However, Roth IRA beneficiaries do. And they’ll face a 50% penalty for not taking a
required distribution, even though those distributions are generally tax-free.

11. I have about $1.3 million in my IRA. Most of it came from my company’s plan when I retired. And if I remember correctly, I was putting money into that plan after I had paid tax on it. Can I just remove the after-tax money when I’m forced to begin RMD? That way I wouldn’t have to pay income tax.

A. Very few people are going to have $1 million IRAs that came from contributing $3,000 a year. Most will be from rollovers. And it’s possible that their previous plans allowed pre-tax and after-tax contributions.

Although your idea is shrewd, the IRS is onto you. The after-tax funds have become part of your IRA and any withdrawals from the IRA are subject to the “Pro Rata Rule.”

12. I’m about to begin RMD, but I don’t need the income right now. What do you think I should do with it?

A. Our clients take advantage of a solution that will allow you to take your RMD, pay the required tax, and place that anywhere you want. Even spend it.

14. I’ve started taking my RMD. If I die before my wife, what will she have to do?

A. Your wife could rollover your IRA into her IRA. But she’s not under any obligation to do so. And it can be done anytime, plus it gives her
more flexibility.

However, your year-of-death distribution must be taken before your wife could rollover your IRA to her IRA. The funds will then be considered hers and subject to the RMD based on her age.

Speaking of age... you didn’t mention her age. And I assumed that she is younger. But if she’s older, she’d be better off using your remaining
life RMD rather than her own. This will give her a longer time to withdraw the funds, which means smaller distributions and less income tax than if she used her shorter life expectancy.

15. I realize that my IRA is part of my estate. And I estimated that my heirs might have to pay up to 50% in federal and state estate taxes on it when I die. So does this mean my loved ones could lose 50% to estate taxes plus another 35% to federal income taxes?

A. You’re absolutely right! In most cases IRAs are exposed to income and estate taxes upon the owner’s death. However, they can become stretch IRAs because of the distribution tables.

So in your situation, 85% could disappear in a flash! But there is a way to protect against losing a big chunk of that.

An irrevocable life insurance trust could be set up to pay the estate tax. Then your beneficiaries could stretch the RMD, as well as the associated income tax, over their life expectancies.

16. My father died last year and I was his IRA beneficiary. He was 66, so he hadn’t started his RMD yet. I’m 41. I don’t need the money now. So what can I do to pay as little income tax on the IRA as possible?

A. The IRS won’t let the money just sit there... they want the tax on it. But you can stretch the payouts over your life expectancy (42.7 years)
from the table below to determine the taxable distribution. 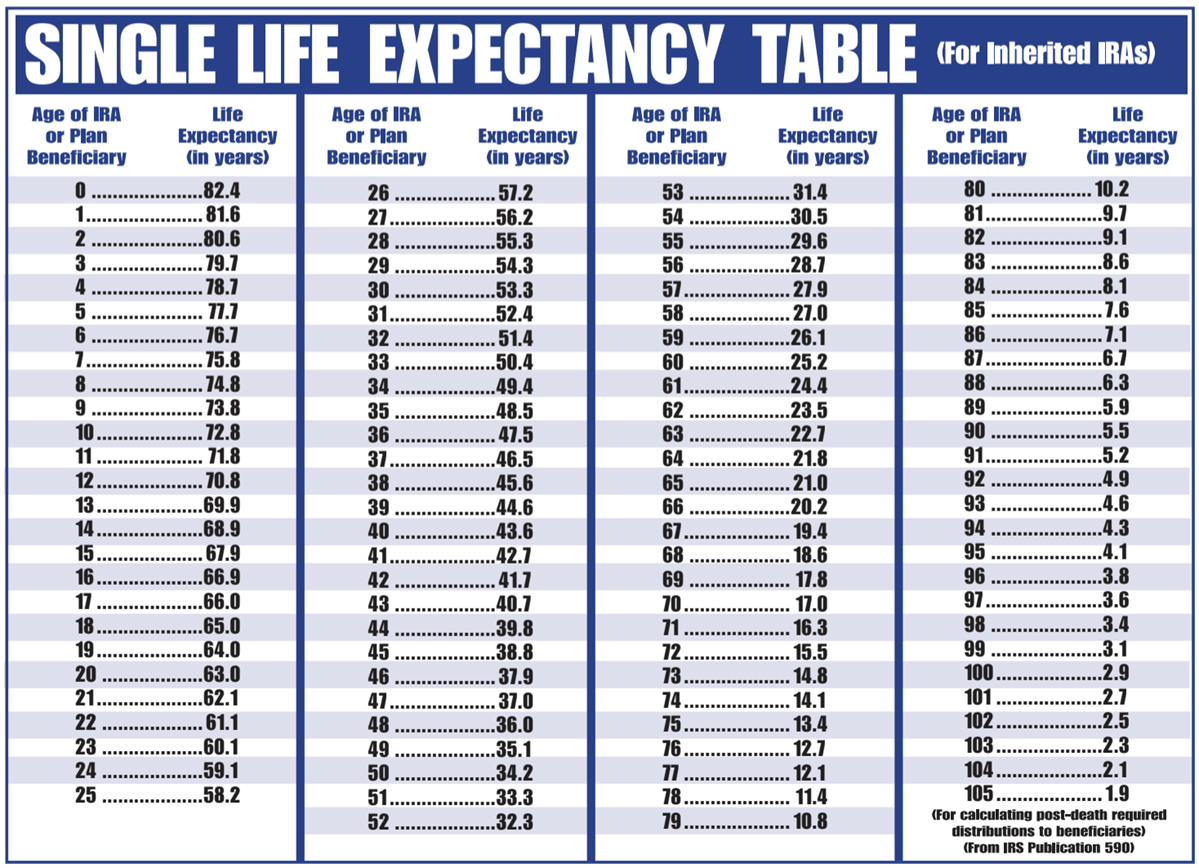 A. It’s good that you named beneficiaries. But there’s a potential problem here. When you die, your children’s RMD will be based on the life expectancy of the oldest, which is 41.7 years. This means your 25-year-old would have to take the money out much faster than his life expectancy... 58.2 years. And the 21-year-old will lose out the most.

Therefore, it would be better that each beneficiary uses his or her own age for computing their RMD on the inherited IRA. This way, if one beneficiary is 21-years old and another beneficiary is 42-years old, the 21-year old would not be forced to use the shorter life expectancy of a 42-year old.

And generally, the easiest way to take care of this is to create a separate account for each beneficiary while you are alive.

18. I can’t think of anyone to name as a beneficiary on my IRA. My three children are a disappointment, and my wife divorced me. I figure they can just fight it out among themselves after I’m gone. Will that mess up my RMD?

A. Not yours, but certainly theirs. And it depends on whether you started your RMD before you die.

When you don’t name a beneficiary, the money goes to your estate. And if you die before your RMD begin, your estate’s beneficiaries must withdraw the funds under the five-year rule. What’s more, it doesn’t matter how much they take out during the five-year-rule period, as long as the account is depleted by December 31 of the fifth year after your death. Any balance remaining will be socked with the 50% penalty.

On the other hand, if you die after the RMD start, then the distribution period will be based on your life expectancy calculated in the year of death, reduced by one for each subsequent year.

So what it comes down to is that they’d lose the ability to stretch the money out over their life expectancy. Thus, they’ll pay taxes faster and
probably not end up with as much as they had hoped to.

19. If I die first, my wife will need my IRA to support herself. I also have a 35-year old daughter who is financially independent. Is there anyway to leave my wife enough money and not have her worry about taking RMD and paying taxes?

A. Yes, there is. We have a strategy that will possibly let your wife avoid all estate and income taxes on your IRA. Plus, she won’t have to hassle with RMD, and she’ll be able to spend the money anyway she pleases.