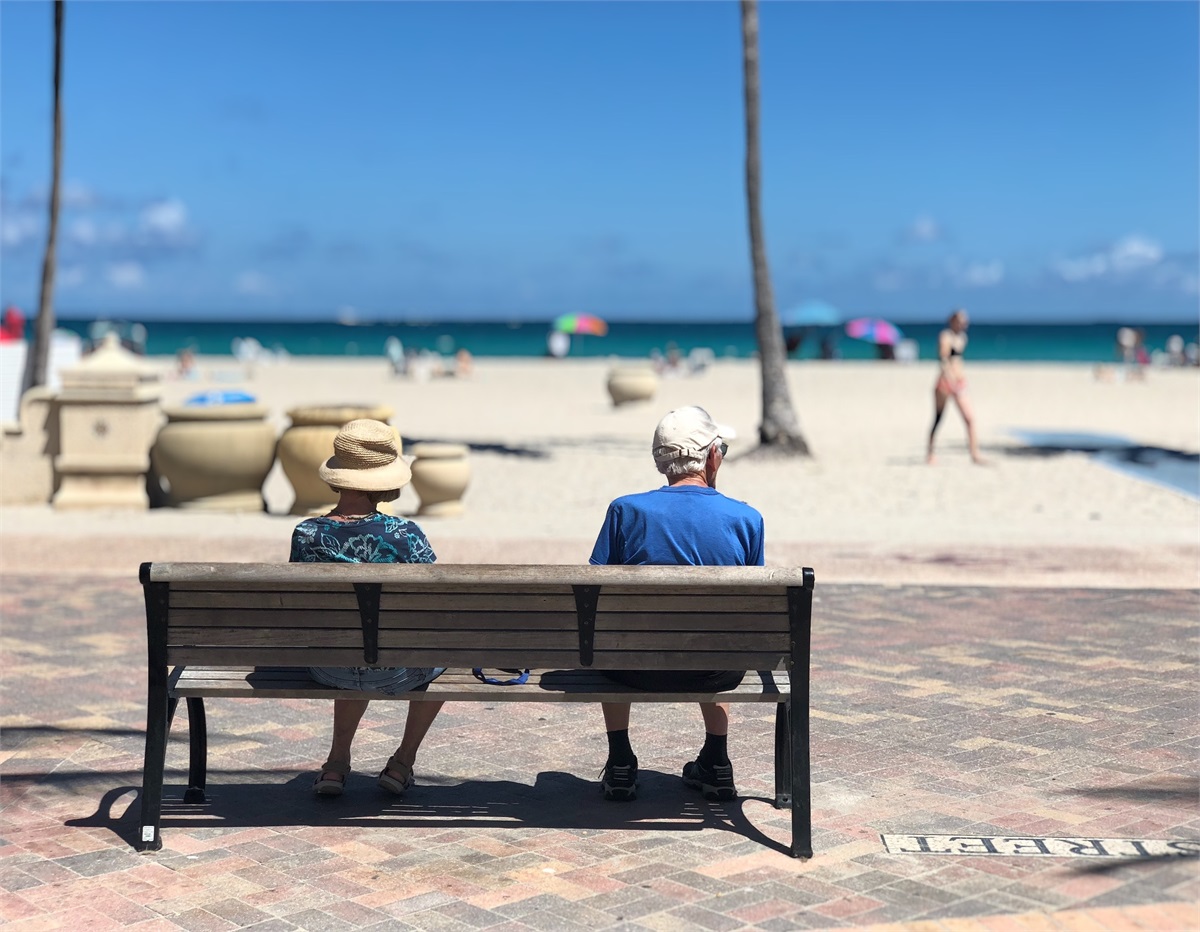 When it comes to your IRAs and other retirement accounts, you probably have a lot of questions like:

How much are my withdrawals taxed?

When do I need to begin taking withdrawals?

How much will I have to take?

What happens to my IRA when I die?

And perhaps most importantly...

How can I minimize my taxes so I can spend more of my hard-earned money?

I want to cover all of these topics throughout this series!

You know, years ago life was simpler in many ways and retirement was really no different. Many people went to work and then, when they retired, they collected a pension and Social Security benefits.

There wasn’t as much needed in the way of planning and people weren’t all that concerned about running out of money since both their pensions and their Social Security benefits were generally guaranteed. For most people, that along with whatever else they had managed to save along the way was enough.

Today, though, things are different. Companies and other organizations have abandoned pensions in mass numbers and instead, have turned to 401(k)s and similar plans, shifting many of the risks they once shouldered onto the backs of employees and their families.

Retirees are now responsible for making more of the critical decisions that will determine how successful they are in retirement. And that includes keeping up with changes to the law that happen all the time.

For instance, just at the end of last year, the Setting Every Community Up for Retirement Enhancement Act – known as the SECURE Act for short – made a number of significant changes to the rules for retirement accounts; many of which I will be discussing in this series.

The bottom line to all of this, though, is that today, more than ever, when it comes to your retirement, you are on your own.

How Long Will You Live?

Your retirement savings may have to last you a lot longer than you think.

According to a 2011 Society of Actuaries report, over 40% of retirees underestimate their life expectancy by five years or more. Take a look at this chart to see what I mean. 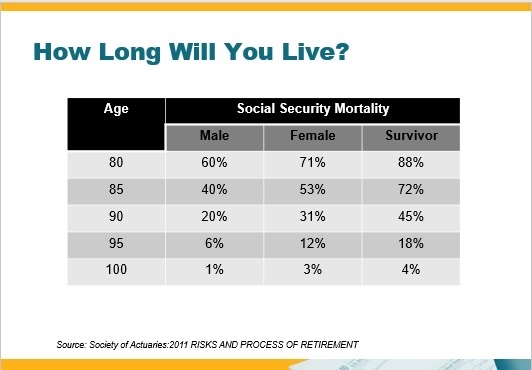 If you’re a man and you’re 65, you have a pretty good chance of living to at least 85. If you’re a woman and you’re 65, you have a better chance of living past 85 than you do dying before it. And if you’re married and both you and your spouse are 65, then there’s about a 50/50 chance that at least one of you will live to be 90.

In fact, there’s about a 1 in 5 chance that at least one of you will live to be 95. That means your retirement savings could easily have to last you 20, 25, 30 years or even longer. That’s probably much longer than a lot of you have considered. Put all of this together and it makes having a plan all that much more important.

With that in mind, one of the best things you can do as you approach retirement, if you’re not already there, is to beef up your retirement savings by contributing as much as possible to tax-favored retirement accounts.

Although contributing at younger ages is more powerful because it gives your contributions more time to compound, you may have been unable to save as much as you wanted to because you were bogged down by mortgage payments, were saving for a child’s education, or had other expenses associated with raising a family.

Chances are, you no longer have those expenses, or they’ll be ending soon. As a result, you may finally have discretionary income that can be used to fund your retirement accounts. So just how much can you contribute?

Well that depends on the type of retirement account, as well as a number of other factors. Let’s begin with traditional IRAs.

A traditional IRA, or individual retirement account, is a personal retirement account that offers certain tax benefits. Contributions may be tax deductible and while your money is inside the IRA, it grows tax-deferred. Ultimately, when you take money out of your IRA, the amount you take out is generally added to your income. We’ll talk about that more later.

And traditional IRA contributions are deductible unless you or your spouse are active participants in an employee-sponsored retirement plan AND your income exceeds an applicable threshold amount. Those limits depend on your filing status and who is contributing to an employer-sponsored plan.

Many of you probably know that there is another type of IRA, called a Roth IRA. Roth IRAs are similar to traditional IRAs in many ways, but there are also some key differences.

One of those differences is that you don’t get a tax deduction when you make a Roth IRA contribution. Once your money is in a Roth IRA, it grows tax-deferred, like it does in a traditional IRA.

The big benefit of the Roth IRA though, and another key difference between it and a traditional IRA, is that Roth IRA distributions can be tax free in retirement. If you’ve had any Roth IRA for more than five years and you’re over 59 ½, then all withdrawals from any of your Roth IRAs will be tax and penalty free as part of what’s known as a qualified distribution. Even if you need to take a withdrawal sooner, you can always take out your Roth IRA contributions tax and penalty free.

Can $7,000 Per Year Make A Meaningful Difference?

You might be asking yourself, can a $7,000 contribution really make a difference when it comes to my retirement? The answer is absolutely.

Here’s a quick example... suppose you’re 55 years old now and you plan to retire in 10 years, at 65. The kids have flown the coop and you finally have a chance to focus on saving for your retirement, so you make a full $7,000 Roth IRA contribution annually until you retire. If, say, you earn 6% per year, then by the time you retire in 10 years you’d have close to $100,000.

But remember, you may need to plan on living until 90, 95 or longer. So let’s say that you leave the account alone and it continues to earn 6% per year. By the time you reach 85, even if you never put another dollar in after the first 10 years, you’d have nearly $300,000.

Plus, since you made your contributions to a Roth IRA, that entire amount would be tax free. Still think “just” $7,000 a year can’t make a difference? And just think, if you’re married and you were able to make that $7,000 contribution to both your Roth IRA and your spouse’s Roth IRA, you’d have twice as much... tax free!

If you’re still working and you have access to one or more plans through your current employer, you might be able to do even better.

While the limits on contributions can vary depending on the type of plan your employer offers, you can generally contribute more to your company plan than you can to an IRA. For example, in 2020 you can contribute up to $19,500 of your salary into a 401(k), 403(b) or similar plan.

If you’re 50 or older by the end of the year, then you can contribute an additional $6,500 as a catch up contribution, bringing your total potential plan contribution to $26,000. Depending on your plan’s provisions, you may also be eligible to receive employer contributions, such as a company match or profit-sharing contribution.

As you can imagine, putting this type of money away for even just a few years can have a marked impact on your retirement savings. Plus, provided you meet the requirements we just discussed, you can make a contribution to your IRA or Roth IRA on top of your company plan contribution!

So now we have covered a few of the basics. Over this series I will cover even more IRA planning topics such as rollover options, taxation of withdrawals, distributions, and more.

If you have any questions about what I’ve covered thus far, send me an email at dave@daviddenniston.com!

Material discussed is meant to provide general information and it is not to be construed as specific investment, tax, or legal advice. Individual needs vary & require consideration of your unique objectives & financial situation. Neither United Planners nor its financial professionals render legal or tax advice. Please consult with your accountant or tax advisor for specific guidance.