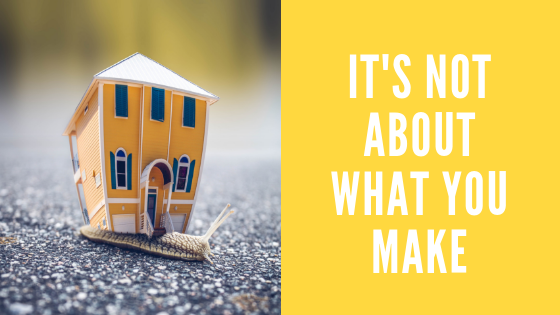 It’s not about what you make

One of my good friends, another financial advisor, often reminds me, “it’s not what you MAKE. It’s what you KEEP.”

This is so ridiculously simple, yet it’s ridiculously true. Of course, being the smart alec that I am, I remind him that if someone is making $25,000 a year, they’re not going to keep anything.

The good news is that this isn’t you. You are a competent, caring medical professional who is making a difference and saving lives every day. (Thank you, by the way!)

There’s no doubt that you are making a handsome wage for all you do. Yet, you are under attack from the federal government trying to tax you more and more and moreand pay you less and less and less through Obamacare and Medicare.

It isn’t as easy as it looks. No doubt about it!

However, if you want to retire, there’s no doubt that most of us have to save money- and a lot of it.

In this post, we are traipsing through 3 scenarios focusing on the BIGGEST aspects of what determines whether or not you can retire to help you come up with “your number”.

What are they you ask?

The “big three” are income, living expenses, and savings. Each of these components can drastically effect one another.

Consider that what you spend in retirement could be the same, higher, or lower than what you are currently spending. They key is figuring that out to the best of your ability.

One of my friends is making great money- $300,000 a year- and sometimes much more. He’s a fantastic salesman who loves his job.

He lives an incredible life. He goes on epic trips all across the country. He is a dreamer and innovator, someone with vision. On top of all that, he is a kind, kind person. He once paid for pizzas for all the nurses at the hospital when he was recovering from surgery.

Yet, he doesn’t have any sort of discipline- he isn’t saving a single dime. Where does it all go?

Even more importantly, I wonder how the heck is he ever going to retire?

How long can he keep up the break-neck pace of his job?

Then, on the other hand, I look at my Great Aunt Margaret and Great Uncle Phil.  They were regular folks- he worked for Union Pacific and she was a secretary for Pabst brewery. In today’s dollars, they were probably making $35,000 a year each.

Unfortunately, their young son, Marty, died at the age of two and they became consumed with one goal in life- to become millionaires and keen investors. They saved every month and slowly realized their goals many times over. It wasn’t because they came into a windfall or created a business- it was because of their steady savings that they were financially successful.

I remember visiting their beautiful ocean-view home in Redondo Beach watching the stock-ticker scrolling at the bottom of the screen while playing with legos and He-Man toys. I had no idea what the heck it was all about, but I determined from a very young age that I wanted to be successful just like them.

Many years later, they passed away and left an estate worth millions of dollars to my whole extended family.

They were the ones who showed me it isn’t what you make, but what you keep.

We are going to look at several case studies over the course of this post. The purpose of each one is to draw attention to certain variables.

I’ll discuss them in more detail after the case study.

Without further adieu, let’s get right into case study# 1:

45 year old Orthopedic Surgeon With Current $530,000 Portfolio (Has an Employer Pension, 6% rate of return, 3.73% Inflation, Student Debts paid off in a few years- NOT included in living expenses)

These numbers blow me away and show the power of small tweaks that can lead to HUGE differences.

Without a doubt, saving more and spending less while you are working is incredibly important. In Scenario 1, this physician is doing an okay job of saving. They are maxing out their 401k and saving a little bit more outside of that and the savings rate builds up substantially after the student debt is paid off.

By the time they retire at 65, they have a sizable portfolio of about $3.8 million. Sounds pretty good, right?

Since we are assuming a relatively safe 6% rate of return, they are digging into their principal at the rate of 5% a year.

By the time they hit 90 years old, they are not only out of money- THEY ARE IN THE HOLE- to the tune of negative $2.9 million. In this scenario, they are screwed in the long-term!

In Scenario 2, living expenses are $20,000 less and continue that way into retirement. Perhaps, they take one less vacation a year or they no longer have the kids in private school. This would be fairly easy to tweak by targeting major expenses.

Look at the tremendous difference! Just by that small change, they have $700,000 more when they arrive in retirement!

If you got a 6% rate of return on that money, that’s a difference of $42,000 a year in additional earnings.

On top of that, their living expenses are much lower due to compounding. In future dollars at retirement, they need about $40,000 less per year- $279k for scenario 1 compared to $236k for scenario 2.

By the time, they hit age 90, they still have a portfolio of $2.7 million. That’s enough to last for a few more years.

Then, Scenario 3 gets even more rosy- by keeping living expenses to $95k, you NEVER dip into the principal until after age 90.

You got it made!

Of course, there is a huge difference in the standard of living between $130k a year and $95k a year.

Yet, I would encourage physicians to think about what they could do with $95,000 a year. You can have a great life with income needs of about $8,000 every month in today’s dollars.

Living expenses are such an important part of what you save and what can seem like small differences can lead to tremendous gaps in retirement.

However, I threw one other variable into the mix.

What if this same couple decided to downsize and live more simply in retirement?

What if the same folks in Scenario 1 with living expenses of $130k, decided that in retirement that they could live on less?

This is very hard to do, but could be conceivable. Maybe, you sell your beautiful home near the city and move to the countryside or a small town in a smaller footprint?

It is very possible that your living expenses could drop drastically- lower property taxes, no mortgage, home equity that you could invest, cheaper gas, cheaper groceries, and cheaper places to eat out.

What if they only needed $100k in today’s dollar to live on in retirement?

The scenario turns from bleak and ugly to a stunning and shining example.

Although they have a smaller portfolio than in scenario 2 or 3, their drastically improved living expenses allow them to have an enjoyable and comfortable retirement.