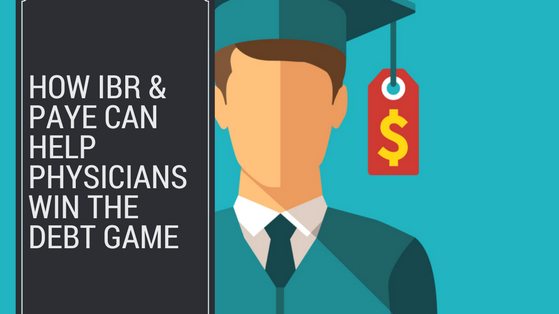 How IBR and PAYE Can Help Physicians Win the Debt Game

Last week, we looked at the nuts and bolts of federal loan-forgiveness programs available to physicians working for non-profit entities. This week, we take a closer look at 2 programs: the Income Based Repayment (IBR) Plan and the Pay-As-You-Earn (PAYE) Plan. We’re focusing on these 2 plans because they require lower premiums in residency and fellowship, which can lead to greater debt forgiveness.

What is the Difference between the Income Based Repayment (IBR) Plan and Pay-As-You-Earn Repayment (PER) Plan?

(Writer's Note: I refer to pay-as-you-earn as PER in most places in this article- most folks call it PAYE now)

IBR* and PAYE* both accomplish the same goal, minimizing your student debt payments while in residency/fellowship and then paying back your student loans at a higher rate once you are making more dough.

The government will ask questions about your household – i.e. spouse, spousal school loans, kids, etc., as those affect the poverty guidelines. How do they determine your income? By looking at your tax return!

The higher you can contribute in those areas, the lower your monthly obligation will be.

Then, payments will increase even more substantially the following year. In this example, it would be after January 2015 before you have a full year of higher income under your belt.

However, the payments DO NOT take into consideration your overall student loan debt (undergraduate and medical school debt) nor your age or whether you have a car loan, mortgage, etc.

The table below was created using the calculators from the Federal Student Aid website*. It assumes that the person (1) is married, (2) has no kids or spousal school loans, (3) the original loans were $20,000 to $30,000 below the current loan amount, and (4) the loans carry an interest rate of 6.8%.

While you could likely easily qualify for IBR while in residency, the calculator on the website doesn’t allow me to calculate the payment at a $200,000 income level, $150,000 loan amount for IBR.

However, we could safely assume that the payment should be $2,216/month given the example below because the monthly payment fluctuates with compensation, but not with the loan amount.

See the tremendous difference between IBR and PER?

There is one big caveat between the 2 programs. To qualify for PER, you must have been a new borrower as of Oct. 1, 2007, or later.

How does all of this tie in with loan forgiveness programs? Let’s take a look at an example where 2 young ophthalmologists, Dr. Smith and Dr. Jones, who started Public Service Loan Forgiveness (PSLF) programs at the very start of residency. They each had an equal amount of student debt coming out of medical school.

Dr. Smith has been in residency for 3 years, has made 36 payments towards PSLF, and went right into practice. He is making $150,000 per year.

Meanwhile, Dr. Jones has also been in residency for 3 years, has made 36 payments towards PSLF, and also just entered into practice. He is now making $200,000 per year.

Let’s examine the difference of what would happen if each of them enrolled in IBR or PER at the start of residency.

The table below adds up the monthly payments from the previous example and multiplies them over 7 years. There is no increase in salary. I’m keeping it simple and flat. The lifetime payments in the table are the combination of interest AND principal over those 7 years.

At the end of the 7 years (assuming continued non-profit employment), the remaining portion of their debt would be forgiven.

This is why PER is superior to IBR when you tie in the student debt forgiveness programs with them.

Additionally, the higher your loans, the more beneficial it will be to be enrolled in PER. Let’s say that you have $250,000 in student loans.

Either is wonderful, but PER is better for debt forgiveness purposes!

Remember – like we mentioned earlier, to qualify for PER, you must have student debt that originated after October 2007. This will likely start affecting residents and fellows that started in 2012 and even more so over the next few years.

What can we conclude from all of these programs?

If you are working for a nonprofit entity, PER is probably a better option unless you do not qualify due to the origination of your student debt. IBR will still be a fine choice.

I would strongly suggest NOT to put extra payments towards your debts if you are enrolled in the 10-Year Public Service Loan Forgiveness program unless you think you may not be ready to make a 10-year commitment to staying in the nonprofit community.

If you are currently working for a nonprofit and are considering transitioning to a for-profit practice after residency, IBR would be my recommendation. Keep in mind that you can make extra payments beyond the minimum that IBR requires to pay it off sooner once you are in practice.

If, as a young physician, you focus on paying off your debts, save for a rainy day, live within your means and put money away for retirement, you can then do the things you’ve long dreamed of doing and be well down the road to financial independence.