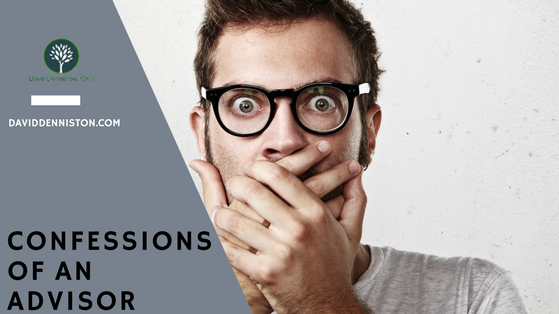 Confessions of an Advisor

Have you ever been in a position that your world was rocked? Have you ever found a shred of evidence that clouded your belief in yourself?

Like deep down inside, you started to doubt yourself...

You wonder if you’ve been giving some of your most critical, fundamental advice incorrectly. You even wonder if you screwed up other people along the way, not intentionally of course, but the guilt still nags at you.

This happened to me not too long ago. I remember sitting there, staring at my screen. Simply dumbfounded. My jaw hung open… this couldn’t be right. My heart jumped somewhere around the middle of my throat. There’s no way this could be right!! I pounded my desk and crunched the numbers again.. and again… and again. A stab of guilt stung me right in the chest. My heart pounded louder and louder… thump, thump, THUMP. Thoughts swirled through my head. Have I been doing everything wrong? Have I been giving crappy advice? I thought, “Oh my god… this changes everything.”

You see I found out that Traditional IRAs/401(k)s royally suck compared to Roth IRAs. Taking a second look at Roths, they may be better in the long run in more cases than what is generally believed.

be better in the long run in more cases than what is generally believed.

The Usual Train of Thinking

You see, Dr. Wise Money (the wonderful Amanda Liu, MD) and I connected over a year ago. Unfortunately, my friend passed away from an untimely death. As I reflect on our conversations and the times we had- I remember this moment.

I asked her what her audience could use for additional advice. She mentioned that talking about the power of Roth IRAs in residency would be great. She asked me to talk about why that’s important with some solid data to back that up.

I thought, great, this will be easy!

I even outlined my thoughts before doing research, which I’ve recaptured for you below.

The Pro Case for Roth IRAs in Residency:

-        Compounding Growth over a longer period

-        Tax brackets may not rise due to the compensation

But… I found out I was wrong.

Because I wanted to do something different for this blog, I really wanted to test my hypothesis.

My belief, my hypothesis was that due to being in higher tax brackets once a physician transitions to practice that they would be better served putting money in traditional IRA/401K rather than Roth/ Roth 401k.

When you are in training in residency, it makes sense that Roth is better. Your taxes are relatively low. As a matter of fact, I see a lot of physicians paying only 10% up to maybe 20% overall federal taxes while in residency.

Not a whole lot of benefit to deduct your taxes when you are losing a sliver of your money upfront, right?

But what about… when in practice?

So far, I was shocked to find out that this line of thinking is wrong.

As a matter of fact, I’ve run over 25 different scenarios and all of them point to this fact:

Roths may be better in the long run in more cases than what is generally believed.

Check this out and nerd out with me.

Details of The Research

I simply don’t have time to outline all of the research, but I will make it available if you ask by e-mailing me at dave@daviddenniston.com.

However, let me highlight a few examples of what I did.

We have a dual physician household, Dr. John Doe Dr. Jane Doe. They are both slaving away as PGY-1 residents and have their eyes full of hopes and dreams of making a difference in the world.

Both of them are making $55k a year right now and $200k a year once in practice, and all of it rises with inflation.

They wanted to know- should we put money in traditional 401k, both Roth traditional, or all in Roth?

Scenario 2:  of traditional and Roth, everything else same as # 1

Scenario 3: all Roth IRA, same as # 1, except the match, stays as pre-tax money

At first blush, scenario# 1 looks like the hands-down winner. Their portfolio grows from nothing to $33,000 by the end of year one.

Let’s jump ahead 10 years later they are doing amazing! A portfolio of $3 mil.

Fast forward many years later and they hit retirement with a total of $21.385 million. Nice!

No, the phase of distributions within game changes the rules.

Have you heard of the term required minimum distribution?

The idea is that once you hit age 70.5, you HAVE to take out a certain amount of money every year from your accounts. Consider that this money has been tax-deferred for all these years.

You have a required amount that you MUST distribute. The government forces you to. Don’t ask me why it’s age 70.5. It’s so weird, but that’s the rule.

Can you see that difference?

ALL of that $205k is now taxable. As a matter of fact, it is throwing you into several tax brackets higher.

Talk about a shocking reversal. I was not expecting that.

They all had the same answer….

While these scenarios I ran pointed to very specific and well-founded conclusions, they are merely a sign.

There were many variables that are missing from real life scenarios- student loans, buying a house, having kids, paying for college, and so on and so on.

This simply reinforces the fact that you should challenge your assumptions. Maybe Roth is the right option for you… but maybe it is not.

Don’t accept an easy answer. Consider your goals and where you want to go.

Work with a fantastic financial planner (insert shameless plug and eye-rolling here) or awesome financial planning software where you can play with all of these variables and create a custom-tailored plan for your situation.

Let’s be honest here, this is painful. This means you are paying MORE taxes today in order to have tax-free money in the future.

However, a spoonful of sugar surely helps the medicine go down.

The views expressed are those of the presenter and may not reflect the views of United Planners Financial Services. Material discussed is meant to provide general information and it is not to be construed as specific investment, tax, or legal advice. Individual needs vary & require consideration of your unique objectives & financial situation.