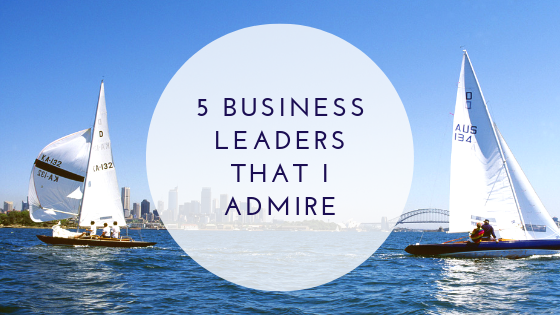 5 Business Leaders that I Admire

As a tyke and a young adult, I had absolutely no idea.

My dad is a great guy and a good family man and there’s many things I’ve learned and carried from him. However, I didn’t really want to be a chemist. Blowing stuff up and recording lots of little notes isn’t my shtick.

My mom was an accountant. Enough said, right? How many of us find that interesting?

My grandfather was a postman. Both my grandmothers were teachers.

All of these are wonderful places in society, but it didn’t fit me. Didn’t interest me whatsoever.

I admired athletes--- but I was long and gangly and tripped over my feet. That wasn’t for me. I really couldn’t aspire to be like them. It wasn’t going to happen.

As I got into college, business and finance really resonated with me. I starting finding people that I wanted to be like.

I started to find mentors and role models and what my path looked like. I also found people I DIDN’T want to be like.

Here are five GREAT mentors and role models who I want to be like (or at least take some of the traits I admire the most):

In case you’re not familiar, Warren Buffett is the chairman and CEO of Berkshire Hathaway. They are a HUGE company that invests in a bunch of other companies.

Here are some of the companies they own outright:

Here are some of the companies that they own a piece of:

You can imagine, they are pretty wealthy company!! Warren and his partner Charlie Munger have built Berkshire Hathaway into the 5th largest company in the S&P 500.

However, that’s only a small piece of what I admire about him.

“The basic ideas of investing are to look at stocks as business, use the market's fluctuations to your advantage, and seek a margin of safety. That's what Ben Graham taught us. A hundred years from now they will still be the cornerstones of investing”

“During such scary periods, you should never forget two things: First, widespread fear is your friend as an investor, because it serves up bargain purchases. Second, personal fear is your enemy. It will also be unwarranted.”

If you don’t know his name, you know his brand!

Jeff Bezos is the founder of Amazon.com.

That’s right—the Amazon we all know and love. That ships us stuff we buy so we don’t have to leave the comfort of our own homes. That has created a huge demand for the cloud so we can leave our hard drive space minimized.

Like Warren, he is filthy rich. In July 2018, his net worth was estimated to be $150 billion. With his recent divorce to his wife, we can guess that’s probably gone down significantly.

However, he’s not only founded Amazon. He founded another company called Blue Origin which is taking spaceflight and interstellar travel to the next level. He’s competing with Richard Branson’s Virgin Galactic to take people into space.

Here are some traits that I really admire about Jeff Bezos:

These first two names you are probably familiar with or you know their products.

This gentleman, Pat Flynn, you may not know.

He’s not a billionaire. He’s probably not even in the hundred millionaire club (yet).

However, he is an amazing business leader and someone who I really, really admire.

He is the founder of Smart Passive Income podcast. Check it out here.

In his podcast, he’s been on this journey to develop multiple streams of income and have it be ‘passive’. Honestly, passive is a sexy name and is probably a misnomer. I suggest ‘residual’ income instead of ‘passive’ because you have to work at it.

Anyhow, there’s this new term out there called “content marketing” and Pat is the king of it! No, he’s the emperor. No, he’s the…..  I don’t know. He’s at the top and he’s awesome.

I have done ALL of these things and I’ve always found Pat’s advice to be rock solid.

Check out his books:

Here’s some of the things that I admire about Pat:

I’m sure you know this name!

Founder of the Boring Company

He holds South African, Canadian, and U.S. citizenship. Born and raised in Pretoria, South Africa, Musk moved to Canada when he was 17 to attend Queen's University. He transferred to the University of Pennsylvania two years later, where he received an economics degree from the Wharton School and a degree in physics from the College of Arts and Sciences. He began a Ph.D. in applied physics and material sciences at Stanford University in 1995 but dropped out after two days to pursue an entrepreneurial career. He subsequently co-founded Zip2, a web software company, which was acquired by Compaq for $340 million in 1999. Musk then founded X.com, an online bank. It merged with Confinity in 2000 and later that year became PayPal, which was bought by eBay for $1.5 billion in October 2002.

In addition to his primary business pursuits, Musk has envisioned a high-speed transportation system known as the Hyperloop, and has proposed a vertical take-off and landing supersonic jet electric aircraft with electric fan propulsion, known as the Musk electric jet.[17] Musk has stated that the goals of SpaceX, Tesla, and SolarCity revolve around his vision to change the world and humanity.[18] His goals include reducing global warming through sustainable energy production and consumption, and reducing the risk of human extinction by establishing a human colony on Mars.

This dude doesn’t know when to stop! He has this whole history of starting, stopping, selling. He has so many interests that he makes MY head spin and that’s saying something!

He has his fingers in so many pots that I don’t think he has any fingers left.

Here’s what I admire most about him…

Similar to Pat Flynn, you probably haven’t heard of this guy either!

However, for someone like me who creates content and is looking to grow his business, I really admire this guy.

Like some of our other friends, he started his business, Digital Marketer, out of his dorm room.

He’s friendly and out-going and just a regular dude.

He’s the kind of guy you want to hang out with!

They’ve built certifications and various programs that are not only super helpful and educational, but they are also done with excellence.

I’ve bought a few of their courses and I’m a super cheap guy! As a matter of fact, I would pay to get some of my staff certified so that they are better educated on various platforms.

So…. Those are my favorite business leaders… who are yours?

E-mail me at dave@daviddenniston.com and let me know.